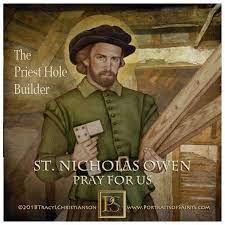 Image taken from Portraits of Saints
Also known as 'Little John' because of his short stature, was a master carpenter, who designed and built countless 'priest holes' in England, during the Protestant revolution. He served the Jesuit priests and became a Jesuit Brother himself. St Nicholas was captured two times and died in the Tower of London from his tortures, never revealing the hiding places he built. He is one of the 40 Martyrs of England and Wales.

Owen House is named after Saint Nicholas Owen SJ (d. 1606), a Jesuit Brother who worked in the English Mission as a companion to the priests. He was a skilled carpenter, building the famous hiding holes for the priests during the persecution. He was chosen as a House Patron to acknowledge the enormous role played at Riverview by the Jesuit Brothers from 1880 until the present, and for his example of a man dedicating the spiritual and manual gifts to the service of God and neighbour.

Saint Nicholas Owen,
Holy Mother of God and all the Saints
who have pleased God in your lives;
pray to Christ my Lord that I might
have this day in peace, love, and humility.
Pray unto God for me,
O Holy Saint Nicholas,
well pleasing to God:
for I turn to you,
who are a speedy helper
and intercessor for my soul.
Amen 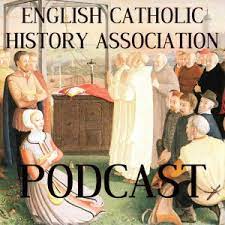